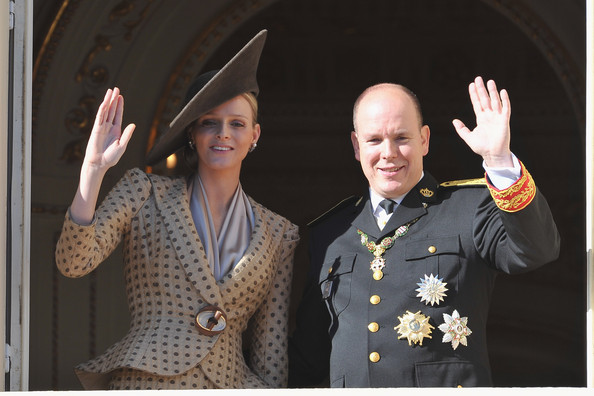 View the full image at Zimbio

The preparations for the wedding of Prince Albert and Charlene Wittstock are almost finished, with the civil wedding tomorrow and the religious wedding on Saturday. The Prince and his Princess-to-be have inspected the scene of the concert that takes place tonight at the harbor of Monaco.

The courtyard has been covered to protect the Bridal couple and their guests against the warm sun in Monaco (or the very small chance of rain), and a stage has been created for the concert tonight. Multiple screens have been put up in different places in Monaco that will show the wedding live.

The logo for the Princely wedding

The guest list has been released. Among the guests? The King and Queen of Sweden with their children and son-in-law, the King and Queen of the Belgians with their children and children-in-law, the King of the Royal Bafokeng Nation, the Prince of Orange and Princess Máxima of the Netherlands, the Crown Prince and Crown Princess of Norway, the Grand Duke and Grand Duchess of Luxembourg with their oldest son, the King of Lesotho, the Crown Prince and Crown Princess of Denmark, Prince Joachim and Princess Marie of Denmark, the Crown Prince of Bahrain, The Hereditary Prince and Hereditary Princess of Liechtenstein, The Earl and Countess of Wessex, Prince Michael of Kent, Princess Lalla Mariam of Morocco with her daughter Lalla Soukaïna Filali, Princess Sirivannavari Nariratana of Thailand, The Count and Countess of Paris, The Duke of Anjou, Prince Faisal of Jordan, The Markgrave of Baden with his eldest son, the Aga Khan, the Prince of Naples with his son and daughter-

in-law, the Prince and Princess of Venice, Empress Farah of Iran, the Crown Princess and Prince Radu of Romania, Princess Ira of Fürstenberg, Prince Leopold of Bavaria, the Duke of Braganca, the Duke and Duchess of Castro, Prince Georg Friedrich of Prussia, and Grand Duchess Maria Vladimirovna of Russia and her son.

The TRF team has also been preparing for the wedding. The Bridal couple now has it’s own sub-forum in the weddings forum: Wedding of Prince Albert II and Miss Charlene Wittstock 1-2 July 2011

In their sub-forum, multiple threads related to the wedding and the events surrounding the wedding can be found: