Here we go again – while the Epson Derby has been the appetizer, the “hat season” of the British royal family has officially begun now with this year’s Trooping The Colour – the annual Queen’s Birthday Parade, held on Horse Guards Parade in London in June each year.

Her Majesty Queen Elizabeth II, the “leading character” of this spectacle, appeared in a repeated pale blue skirt suit with a matching ice-blue hat. One of her most delicate brooches, pearl-earrings and a necklace as well as a pair of white gloves finished the look.

The Duchess of Cornwall chose a cream outfit, recycled her elegant wide-brimmed wedding hat with lace details by Philip Treacy and added an impressive pearl choker. 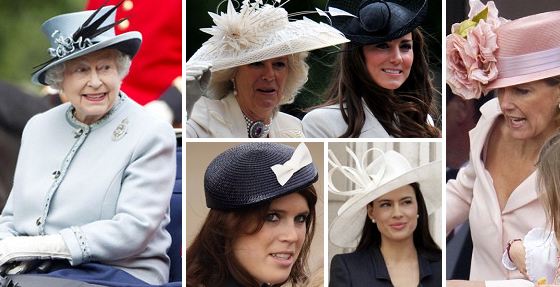 As expected by many, the Duchess of Cambridge made her debut at this year’s Trooping The Colour. In a carriage together with the Duchess of Cornwall, Prince Henry and the Duke of York, she appeared in a double breasted ivory coat with drapery by Alexander McQueen and a black fascinator by Philip Treacy. A simple pair of stud earrings completed the elegant and uncomplicated look.

Sophie, Countess of Wessex, also went for recycling this year. Both her hat and jacket had made their debuts at Royal Ascot a few years before. Her feminine pink outfit was topped by a Treacy hat that had a huge flower on it. Princess Eugenie went for a rather discreet blue and white outfit this year. A navy blue jacket she wore to a lovely white dress. She had chosen a small matching hat with a little white bow on it to this outfit.

Also spotted and another debut on the balcony this year was Sophie Winkleman, also known as Lady Frederick Windsor. She wore a wide-brimmed white hat (presumedly Treacy again), added a simple pair of pearl earrings and wore a navy blue skirt suit to which she chose an ivory handbag.