The British Royal Family was out in force yesterday, attending a special church service at St George’s Chapel, Windsor to mark the Duke of Edinburgh’s nintieth birthday, which was on June 10.

The private service for around 750 guests was attended by the four children of the Duke of Edinburgh and Queen Elizabeth II – the Prince of Wales, the Princess Royal, the Duke of York and the Earl of Wessex; along with their children, and the other senior members of the Royal Family (the Kents, the Gloucesters and the children of the late Princess Margaret). Other guests included members of the Mountbatten family, the Greek Royal Family and individuals associated with the Duke’s charities.

Prince Philip was praised by the Dean of Windsor, the Right Reverend David Conner, for his tireless support of the Queen, and for his patronage of over 800 organisations. A reception was then held at Windsor Castle for the guests, followed by a smaller private lunch for the Duke’s close family.

The Duke had continued his hard work on Friday, when he attended a charity reception at Buckingham Palace. That same day, the Queen bestowed the title ‘Lord High Admiral’ of the United Kingdom’s Royal Navy. 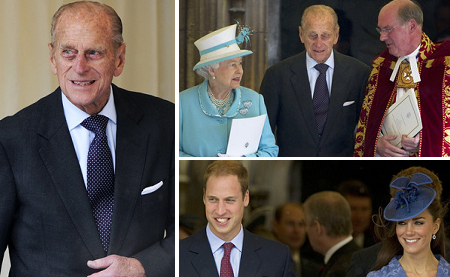 View more images of the Duke's birthday service at Zimbio

Prince Philip was born as a Prince of Greece and Denmark on June 10, 1921 in Corfu, Greece to Prince and Princess Andrew (née, Princess Alice of Battenberg) – famously, on the kitchen table at Villa Mon Repos. Four older sisters had preceeded the infant into the family: Margarita, Theodora, Cecilie and Sophie. The family was exiled to Paris, France in December of 1922, when the monarchy was overthrown. Marriages, the rise of Nazism and medical issues further tore the family apart in the late 1920s-early 1930s.

After an education at Cheam School, Schule Schloss Salem and Gordonstoun, the Prince joined the British Royal Navy in 1939 and graduated from the Royal Naval College of Dartmouth the following year. He eventually attained the rank of Lieutenant. It was while at Dartmouth that the Prince met his future wife, the then Princess Elizabeth of the United Kingdom. Their engagement was not announced until July of 1947, eight years after their first meeting. By this stage, the Prince had renounced his Greek and Danish titles and was known as ‘Lieutenant Philip Mountbatten’.

The couple were married at Westminster Abbey on November 14, 1947; and Philip was given the title ‘Duke of Edinburgh’, with the style His Royal Highness by his father-in-law, King George VI. Four children were born of the marriage: Prince Charles in 1948, Princess Anne in 1950, Prince Andrew in 1960 and Prince Edward in 1964. Eight grandchildren and one great-grandchild currently make up the Duke’s immediate family.

To read more about the Duke of Edinburgh, visit this forum at TRF.

One Response to Royal Family Comes Out as Duke Reaches 90