The Epsom Derby’s Royal Fashion for 2011

June 4th was the day for the Queen’s annual visit at Epsom Derby. Surprisingly it turned out to be the biggest public family gathering since the wedding of Prince William to Miss Catherine Middleton in April. One of the nicest surprises perhaps might have been that the Duke and Duchess of Cambridge in fact joined the Queen and family at the Epson Derby festival this year.

All eyes were on the newly-wed Duchess of Cambridge when she appeared, accompanied by her elegantly dressed brother in law Prince Harry and her also dashing looking husband Prince William. For this occasion, the Duchess had chosen the soft white Peacock dress by Reiss and added a collarless ivory tweet jacket by Joseph. Her elegant coffee-brown hat (rumoured to be either by Philip Treacy or Stephen Jones) came to shine through a sophisticated 40’s-style-updo and matched well with the cream colored outfit that was finished by a golden clutch and nude platform heels – both by L. K. Bennett. 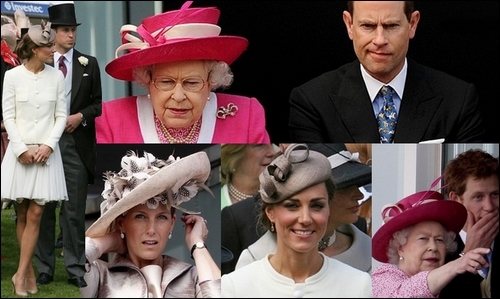 Her Majesty entered the race course in a smashing pink outfit which had made its debut at Royal Ascot in 2009. Prince Harry, dapper in suit and top hat, added a soft pink flower to the lapel of his gentleman outfit during the race – just as if he wanted to match it with his grandmother’s bright look.

Also sighted were Princess Beatrice and Princess Eugenie of York. Beatrice wore a lovely summery outfit – she had chosen a grey dress with yellow and blue roses pattern and a white fascinator with large flowers. Princess Eugenie wore a white dress with black polka dots and belt, as well as a wide-brimmed white hat with a black rim. This almost-conservatively classic style she highlighted with eye-catching black peep-toe heels.

The Countess of Wessex made her entry in a champagne outfit – a silk skirt suit with a lovely clutch and a large-brimmed feathered hat. Her husband, Prince Edward, Earl of Wessex, lightened up his classy appearance with an original tie that had – yes! – horses on it.

The Epson Derby might not have been the most successful day for the Queen’s horse (which didn’t win), but most definitely it was a lucky day for royal watchers and the fashion watchers in particular. A nice appetizer for the coming outfits of the British Royals at Trooping The Colour and of course Royal Ascot 2011 either way!

5 Responses to The Epsom Derby’s Royal Fashion for 2011