State Visit from Luxembourg to Norway

On May 30th Grand Duke Henri and Grand Duchess Maria Teresa of Luxembourg arrived in Oslo for a three-days State Visit to Norway. The couple was welcomed by the Norwegian Royal couple, King Harald V and Queen Sonja, with a formal ceremony on the Palace Square. The Crown Princely couple was also in attendance.

After the ceremony the Grand Ducal couple attended the traditional wreath-laying ceremon, where foreign Heads of States usually lay a wreath to commemorate the Norwegians who lost their lives in the Second World War.

Later the day Queen Sonja and Grand Duchess Maria Teresa visited Sæterhytten outside the Oscarshall Palace. There they were given a guided tour and watched a musical show planned and performed by children with disabilities.
Afterwards they had a guided tour at Oscarshall Summer Palace. The palace was renovated lately and reopened in 2009. The palace is open for visitors during the summer months.

In the evening a gala banquet was hosted at the Royal Palace in Oslo. The gala was also attended by the Crown Princely 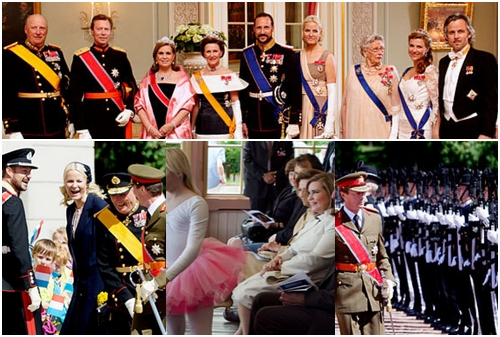 Click at the image to see a gallery at Kongehuset.no

The second day of the State Visit began with a breakfast with business leaders. The Grand Ducal couple of Luxembourg and the Norwegian Royal couple then went to Bygdøynes to celebrate the Nansen-Amundsen anniversary of the Fram museum.

Later Queen Sonja and Grand Duchess Maria Teresa visited the National Museum of Art, while King Harald and Grand Duke Henri visited the Gamle Logen conference centre.
After an official luncheon the two Royal couples visited the Norwegian School of Sport Sciences and the Trauma Research Center.
In the evening there was a reception in Oslo City Hall. Again the Crown Prince, the Crown Princess and Princess Astrid were in attendance, too.

During the third day of the visit the King, Queen, Grand Duke and Grand Duchess will travel to Trondheim.

A thread about the State Visit can be found here.