Here is the third instalment of the TRF Blog’s ‘British Royal Wedding Look-Back’ – focusing on the wedding of His Royal Highness the Duke of York and The Lady Elizabeth Bowes-Lyon. The first two instalments looked at the weddings of Edward VII and Alexandra, and George V and Mary.

Prince Albert and Lady Elizabeth had known each other since they were children; Albert, known within the family as “Bertie”, was the son of King George V and Queen Mary, Elizabeth the daughter of the Earl and Countess of Strathmore and Kinghorne. Their courtship began following a dance in 1920. Lady Elizabeth, despite how she may have felt about him, was reluctant to marry the Duke, as she did not wish to give up the ability to ‘speak, think and act’ freely. Nevertheless, in 1923, it was third time’s the charm for Bertie – Elizabeth finally agreed to marry him while the couple were at one of Elizabeth’s family homes in Scotland.

Their engagement was announced officially on January 15th, and portraits were immediately commissioned to mark the occasion. The betrothal of Bertie and Elizabeth was a sign of modernising times, for Elizabeth was classified by British law (despite her father’s peerage). Prior to this marriage, British princes had married foreign princesses.

The couple were married on April 26th, 1923 at Westminster Abbey. The bride arrived at the Abbey in a State Landau, accompanied by her father. They had departed from the family’s London home in Mayfair, giving the press and public an opportunity to see the bride in her wedding gown prior to her arrival for the ceremony. Upon her arrival to the Abbey, Elizabeth placed her bouquet at the Tomb of the Unknown Warrior. This was an unexpected gesture, and started a tradition within the Royal Family – every bride since has done so, although as they were leaving the Abbey instead of arriving. 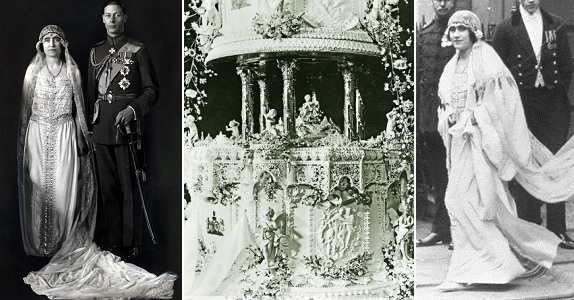 Bertie and Elizabeth made their way in the Glass Coach to Buckingham Palace following the wedding ceremony, where they appeared on the balcony with both sets of their parents. A wedding breakfast was held, where a 365kg cake took centre stage. Lady Elizabeth wore a gown made of ivory chiffon which was a high-fashion in the 1920s, designed by Mrs Handley Seymour. Intricate embroidery adorned the front of the gown, while an heirloom lace veil was secured on the bride’s head by a floral circlet. Prince Albert wore the uniform of the Royal Air Force, with the Orders of the Garter and the Thistle.

The Duke and Duchess of York received hundreds of gifts upon their nuptials, including a diamond tiara for the bride from her father (now known as the Strathmore Rose Tiara and currently in Queen Elizabeth II’s possession). Other gifts included a seventeenth-century English clock and various items of silverware.

The couple were happily married for twenty-nine years, and had unexpectedly become King and Queen in 1936 following the abdication of Edward VIII, Bertie’s brother. Prince Albert became George VI, and died in February 1952. He and Elizabeth had two daughters, the current Queen Elizabeth II and Princess Margaret. Queen Elizabeth, the Queen Mother outlived her husband by fifty years.