On the third day of their visit, Queen Beatrix and the Crown Prince Couple were in Dresden, the capital of Saxony. Welcomed by the Prime Minister of Saxony, Stanislaw Tillich, the Dutch Royals started the day by visiting the Frauenkirche Cathedral. This Cathedral was rebuilt in 2005, after the destruction which occurred during the Second World War and is regarded as symbol of peace and reconciliation. 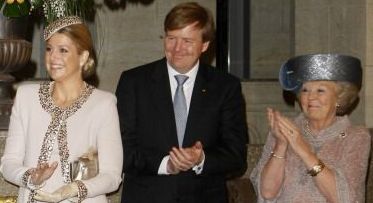 Later in the afternoon, Queen Beatrix, the Prince of Orange and Princess Maxima attended a seminar at the Fraunhofer Campus, on the topic ‘solar energy’, where the Prince gave a speech. Then they, along with the Prime Minister of Saxony, went on a guided tour of a company for solar modules named Solarwatt.

The last event of the day took place at the Palucca Dance High School, where the Dutch Royals watched dancers perform.
More information and pictures of the visit can be found here.