On Tuesday April 12 the Dutch Royals were welcomed by German President Christian Wulff and his wife, Bettina at Bellevue Palace with a military guard of honour. 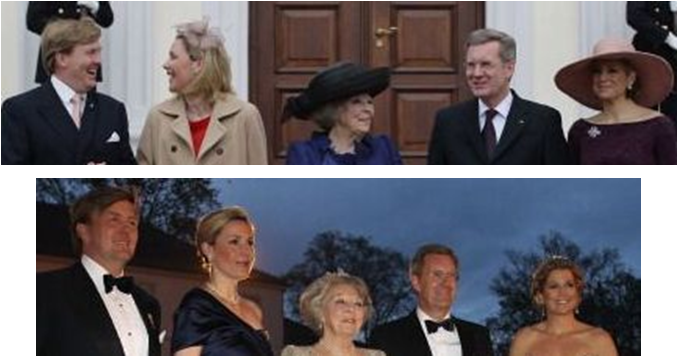 After the welcome ceremony, Queen Beatrix, Prince of Orange and Princess Maxima had a meeting and a lunch with the Chancellor Angela Merkel at the Chancellor Office.
In the afternoon the Queen and the Crown Prince Couple attended various events.
They visited the Neue Wache memorial to the victims of war and violence; were present at the Dutch Embassy to take part at a discussion with German and Dutch young people.

In the evening the Dutch Royals have partecipated at a State Banquet in honour of the visit at Schloss Bellevue.
More information and pictures of the visit can be found here.