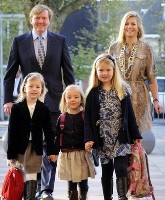 On Monday April 11, just one day after her fourth birthday, Princess Ariane started her first day of school.

Princess Ariane was accompanied to the public school Bloemcamp in Wassenaar by her parents Prince Willem-Alexander and Princess Maxima, along with her two older sisters Princess Amalia and Princess Alexia, who also attend the school.

Princess Ariane will study in class 1A and her teachers will be Carla (on Mondays) and Yvonne (from Tuesday to Friday). Her two older sisters started at the school in December 2007 and June 2009, respectively.