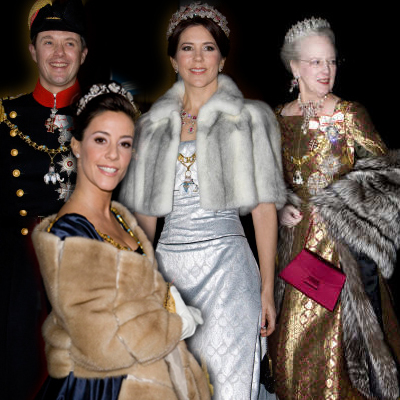 The Queen this year chose a recycled gold satin dress with red detailing (photo 1, photo 2). The dress was accessorised with a fur stole and regalia from the Crown Jewels collection (photo 3 – Danish Royal Watchers).

This year Mary chose to recycle a dress that had first been seen during her pre-wedding festivities and then later worn for a banquet in honour of the visit by the President of Brazil (when she was in the early stages of her pregnancy with Isabella) (photo). The silver self-patterned dress was caught at the back with a black rose before dropping into a court train. Mary chose to accessorise the dress with a fur bolero and her Ruby parure.

Attending the event for her first time, Marie chose a beautiful midnight blue satin dress with a full skirt that carefully concealed her pregnancy bump (photo 1). Similar to the other Royal ladies, Marie chose a fur stole to keep out the freezing cold of the evening and wore a diamond floral tiara which she had first used at her wedding (photo 2).

The Queen wore the same blue embossed dress with fur trim for the reception that she has worn since 2006 (photo 1, photo 2). Due to the reception being held during the day, the style of dresses worn by the Royal ladies is very different from those gala dresses that would normally be worn; therefore there is a high level of recycling of these more formal dresses.

Again Mary chose to recycle a brown dress with a floral patterned coat that had first been worn at the same event in 2005 (photo – Royals web-log). Mary unusually added a brown headband to accessorise.

Mary wore a very simple brown dress cinched at the waist with a narrow belt that emphasised her slender frame (photo). The outfit was set off with a pair of Mary’s trademark pumps.

An overview of dresses worn by Mary at the New Year Galas since 2005.
More pictures and information can be found here.