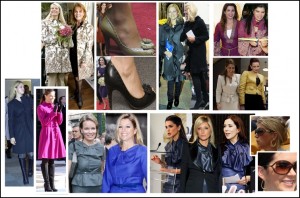 Jordanian princesses, Princess Haya and Princess Sumaya, are seen in the same deep red with gold embroidered thoub with different linings see here, Princess Sumaya added a red scarf to her overall look. Lalla Salma was seen in a yellow Valentino jacket matched with brown at an event in Morrocco, where Princess Haya was seen in the same jacket but in beige with a matching skirt during a visit to Portugal see here.

Tom Ford sunglasses have been a big deal lately, Princess Mary and Princess Maxima both have a pair of the Tom Ford’s shades, who wore them better?

Princess Victoria and her sister Princess Mandeleine choose to go for the same jacket in different colors, Victoria’s choice seems to be a happier choice and a great color for her, the sisters both choose to wear the coats with boots.