Victoria in Paris – A Fashion Review

From September 26 to September 29, newlyweds Crown Princess Victoria and Prince Daniel of Sweden visited France for the 200th anniversary of the Bernadotte dynasty. Among the royal watchers, this was also an interesting topic fashion-wise. 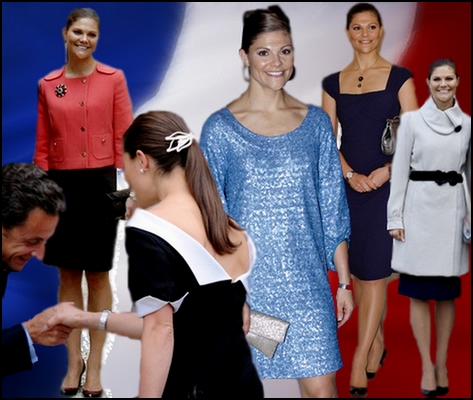 Collage thanks to TRF member Her_Majesty

On September 27, Crown Princess Victoria was welcomed by the mayor of Sceaux and wore a deep purple dress by LK BENNETT with well matching accesoiries such as earrings, necklace, shoes and a bag by Kenneth Cole. Still glowing the dress fitted her like a glove. Later on she added a beautiful cream white coat by H&M to this look.

Springing for a surprise, she went for a sixties-inspired sequined blue dress when she was dinner guest at the Culture Ministry in Paris.

On day 3 of the visit, Victoria was back to her sophisticated and conservatively chic style as Prince Daniel and she visited the Musée Bernadotte in Pau, wearing a coral red jacket and a black pencil skirt with matching high heels.

Finally, Sweden’s Crown Princely Couple were welcomed by French President Nicholas Sarkozy and his wife Carla Bruni. For this occasion, Crown Princess Victoria chose a timeless and elegant black and white dress with an interesting low neckline in the back of the dress. Considering the similarity between this delicate dress and her wedding dress – especially when it comes to the cut of the neckline and the way it folds over at the front and back – there is a possibility that the dress was also designed by Pär Engsheden, her wedding dress designer. Trés chic!