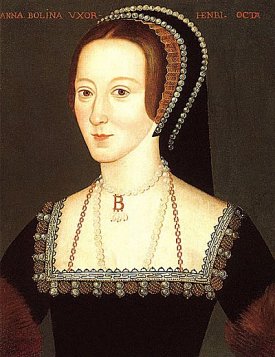 A new exhibit at the British Library beginning in April will feature a love letter from Henry VIII to his inamorata, Anne Boleyn. Never before exhibited, this letter has been hidden in the Vatican for centuries. Historians believe that the letter was stolen from Anne.

The exhibit about Henry VIII is curated by Dr. David Starkey. Most Tudor fans will remember that Dr. Starkey wrote The Six Wives of Henry VIII and was the narrator of the series by the same name. In his interview Dr. Starkey made, in my opinion, the controversial statement that “Henry is not only England’s best-known king – with his wives, his girth and his bloodthirstiness – he is also our most important single ruler.” Not William the Conqueror, Alfred the Great, or some other worthies?

We all know that this romance ends badly, at least for Anne. But at first Henry writes honeyed words in French to his new love and draws her initials inside a heart. It comes across as rather juvenile. The letter is written possibly as early as January 1528 and reveals that, long before Anne’s 1533 pregnancy, Henry was determined to marry her. He begs her pardon for ever thinking that she could be a mere mistress and suggests that physical intimacy had already begun.

The exhibition runs from 23 April to 6 September. A press release by the British Library may be found here.