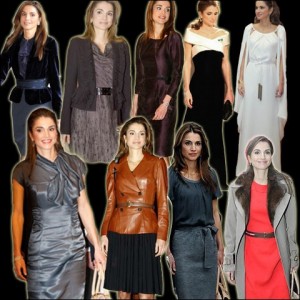 King Abdullah II and Queen Rania of Jordan just ended a three-day state visit to Italy. The couple had a busy schedule with different events, from daytime to gala dinners. At each event, Queen Rania turned up wearing a different outfit. As Queen Rania arrived in Rome, she was seen wearing a lovely navy/royal blue velvet jacket, skirt and a ruffled top matched with a wide belt picture.

As the state visit started the next morning, day one, with a welcoming ceremony at the Presidential Palace, Queen Rania choose to wear a Fendi black and white dress with a matching black jacket and a belt, the outfit was paired with beige shoes and a beige bag which didn’t really match the outfit (can I add, in my opinion) picture. For the next event on day one, Rania choose to wear a solid black cocktail dress which had weird cuts on the waist, yet was flattering picture. Later that evening Queen Rania wore an Armani prive evening dress for the gala dinner, the dress was black velvet with a white upper part picture.

On day two, Queen Rania went for a similar look that has been seen in the past, a black pleated skirt with a brown leather jacket by Prada and a belt which really didn’t match the look picture. Later that day, Queen Rania was seen in a silver Prada dress at two other events with nicely done hair picture. In the evening, the Jordanian royals held a dinner for the Italian President and his wife, where Queen Rania went for a white evening dress said to be by French designer Stephane Rolland, the dress was Greek inspired picture.

The final day of the visit, Queen Rania was spotted in a lovely orange/red dress which she wore a nice greyish trench coat with brown fur trimming over it picture.