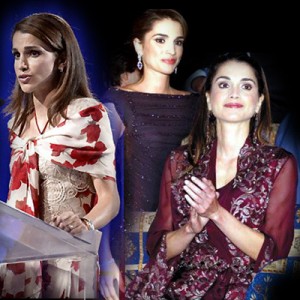 Since Queen Rania became Queen of Jordan in 1999, she has been seen in many dresses by the international Lebenese designer Elie Saab, who has dressed royalty and celebrities like Angelina Jolie and Haly Berry. Queen Rania has worn varioues dresses, mostly which come down the Haute Couture runway, and recently seen in his Ready-to-Wear line. Dresses have been worn on state visits, official and private events, as well as for photoshoots.

Queen Rania was first seen in Elie Saab at her husband, King Abdullah II’s, coronation in a two piece gold embroidered organza gown with lace inserts here. Elie Saab has also created a few dresses with alterations to the original piece, as this worn on a state visit to Swedenhere, also to an event in Jerash, Jordan, the designer created one of his ultra modern gowns into a traditional looking gown which was a perfect choice for Queen Rania here and another more traditional looking gown here in shades of blue.

In November 2004 while expecting her son Hashem, Queen Rania wore a lovely green and black gown which was a perfect choice for a pregnant women, matched with a fur wrap here. To a private wedding reception of her brother in law, Prince Hamzah, Queen Rania choice a lovely white dress which was embroidered here. A few other gowns Queen Rania wore of the designer here, here, here.

One Response to Queen Rania’s Loyalty to Elie Saab Fashion