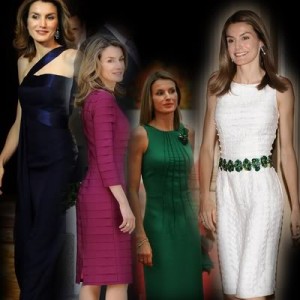 Princess Letizia has hit a high note fashion-wise. Earlier this year, the princess was named to Vanity Fair magazine’s Best Dressed List for 2009, where she came in at number 2. However, Vanity Fair isn’t the only non fashion-focused magazine to notice Letizia. The Times has recently featured her in an article that focuses on her fashions.

Since the announcement of her engagement to Crown Prince Felipe of Spain in 2003, the world has taken notice of Letizia. The former Letizia Ortiz worked as a journalist before her marriage to Felipe. Her style often reflected this at the beginning of their marriage. Letizia often relied on serious-looking business suits for public engagements. Over the years, as she has grown more comfortable with her role as a princess, Letizia has become more fashionable. Her wardrobe features the work of many Spanish designers, from the affordable Zara to the more exclusive Felipe Varela. The princess has become known for her love of platform shoes and form-fitting silhouettes. Her clothing has become brighter, and she has steered herself away from the “news anchor” look of 2003. The article in Time quotes Spanish journalist Maria Jose Iglesias, who says, “she has done more for Spanish fashion in the last five years than decades of catwalks and advertisments”.

To see more royal fashions, including those of Princess Letizia, please visit this thread.